The Assassination of Michael Collins: What Happened At Béal na mBláth? 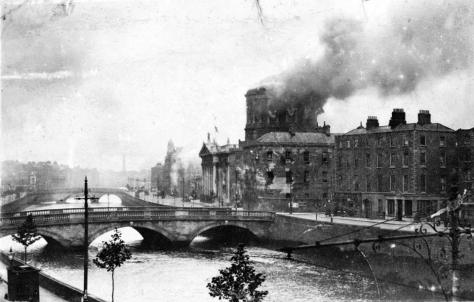 The bombardment of Four Courts, June 1922

There clearly seems to be a need for a definitive study on the
actual commencement of hostilities [in the Civil War ].

Did Michael Collins give the order to begin the bombardment of Four Courts?  Historians have presumed so; but no more.  There is no record of precisely who gave the order.

(Excerpts from the book:)

„We, the undersigned officers of the IRA, realising the gravity of the present situation in Ireland, and appreciating the fact that if the present drift is maintained a conflict of comrades is inevitable, declare that this would be the greatest calamity in Irish history, and would leave Ireland broken for generations…“

– „The Army Document“ signed by Michael Collins and an
equal number of prominent pro- & anti-Treaty officers, 1922

This site uses Akismet to reduce spam. Learn how your comment data is processed.